Bringing an Apple IIe and Peripherals Back to Life. Part Two. Fun with the Apple II Super Serial Card!. 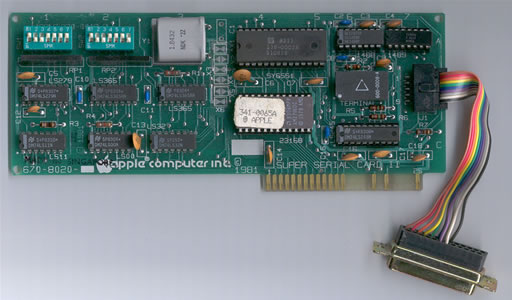 So after the fun and success of getting a drive system working for the old Apple IIe, I decided to see if I could increase the performance of the external i/o to the Macintosh I was using as a host computer, for disk image transfer, dumb terminaling, etc. At that point my only io to the Mac was been handled by the cassette ports to audio i/o method, which only works with cassette wavs and ADT Pro, the awesome disk transfer and boot-strapping utility. Since Ethernet would have been a just bit too late for the IIe, even though there are some really cool options for Ethernet on the II series like Uthernet and others, I decided to go the plain jane Super Serial Card RS-232c route and see how that worked out for me. One of the challenges is that old school serial communication is something that is just not as common on modern PCs as it was let’s say a decade or two ago. Back then modems were de rigueur for network communications. Now a days you need to buy some kind of USB to Serial adapter or USB Serial Controller if you want to do that sort of thing since the real estate for the db9 style pinouts is just not there anymore. Luckily I had one those lying around from some PIC programming projects I had been dabbling in. But even though this hardware was going to work on the Mac the drivers definitely weren’t so I had to scour the web looking for a driver set and some tweaking instructions to get the Serial Controller I had working with Leopard. With the ‘PL-2303’ chip set, I needed to hack the vendor code for my ‘Y.C. Cable, USA, Inc.’ branded cable so that it would work with the generic mac drivers. That proved to be a bit difficult, luckily I found an awesome german website: Planet RCS that had all the juicy details on how to hack that mofo up. Oddly enough it was the configuration of the 21st Century USB Serial Controller that took more effort than the 30 Year old Super Serial Card in this configuration. With the Macinotosh side all set it was time to move onto the Apple IIe and get some hardware.

Luckily, I found a clone of the Apple II Super Serial Card on eBay for $14.00 bucks. I actually could have purchased a brand new $40 card from a vendor with a 20th century website design: MC Price Breakers or from a guarenteed vendor on eBay but I am feeling cheap these days so I went with the lowest cost unit on eBay. In a few days it would arrive in the mail. So in the interim I decided to documentation up myself. First off you I needed the Holy Bible of serial comms on the Apple II the venerable Apple II – Super Serial Card Installation and Operating Manual It’s where many of the secrets are kept. Like writing great rock songs if you want to configure Apple II hardware you have got to know where the Hobbits dwell. In this case my Hobbit was a weird IC block with a triangle on it and two banks of dip switches:
Like opinions on Modern Art it’s hard to find two opinions on what constitutes a ‘Standard’ configuration for Serial Comms on the Apple II. Some people have luck with the settings set way down low then having the modem software on the Apple soft configure the real settings. Following the instuctions on the awesome ADT Pro page I wasn’t getting much love from the card even doing really basic dumb terminal communications with a terminal program on the Macintosh ( ZTerm ). I decided to mostly follow their configuration only I used a higher baud rate ( 9600 ) for the settings on the card. That also seemed to work poorly in the dumb terminal mode in AppleSoft basic. I fiddled with handshaking and baud rates and finally got data going in both directions from Zterm to the Apple. Unfortunately I could get bootstrapping going in ADTPro over serial. But not disktransfers, I finally came to the conclusion that the Java COMM package rxtx just doesn’t like leopard and my chipset for the USB serial controller. It works ok for Rx but craps out on Tx. Oh well that will be a bigger fish to sort out.
Anyhow using audio ADT I made a copy of Modem Manager, a tried and true comm app for the Apple which includes vt220 emulation. After seeing a few websites talking about using the Apple as a Dumb Terminal with Linux, I thought it might be fun to get it going with BSD Unix on the Mac. Using the virtual terminal application ‘screen’ I was able to get the old Apple IIe talking to the Macintosh via getty. I was able to login and run a wide variety of terminal applications on the mac from the Apple IIe. It was weird running lynx and surfing the web and equally strange using irc to real time chat on the Apple IIe keyboard. The web and irc were about a half decade away from the time I last used the Apple for serious work. Back them the serial card would have been attached to a modem and was used to download software from CompuServe and bulletin board applications and also for email. The only chatting I would have been doing was with BBS sysops or other users for high hourly charges on CompuServe’s CB simulator.

« Bringing an Apple IIe and Peripherals Back to Life. Part One.