Getting The Apple ][e on the web. 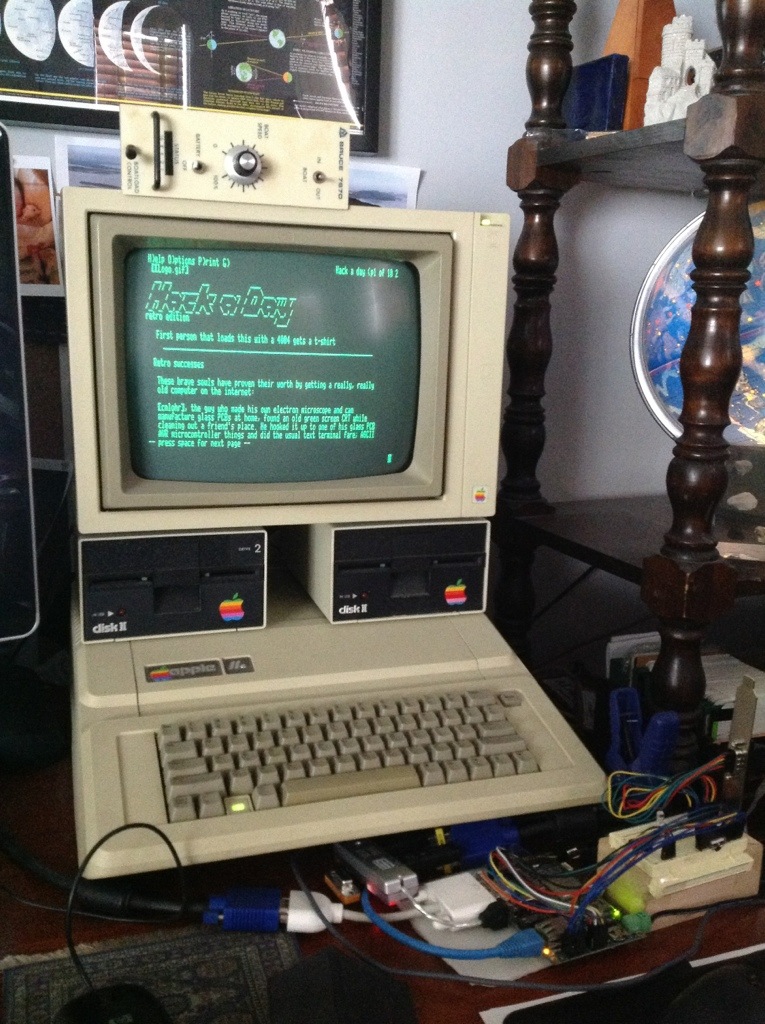 Got the Apple ][e onto the web to check out the nice Hackaday Retro edition today.

It is basically working with the serial interface I mentioned in a previous post here, a knock off of the famous Apple Super Serial Card from a time when serial interfaces were an option on a computer and not a standard part.

I’m Also using the great program for the Apple ][ called Modem MGR which runs on an un-enhanced Apple ][e in Prodos 8. Once it’s booted up you can hit control escape, enter the command option ‘:’ hit return select ‘V’ for VT220 emulation and you are set on the Apple ][ side of the world.

I am basically connecting via serial null modem cable to a snow leopard Macintosh with the semi-standard serial to USB interface, the Prolific PL2303. Oddly enough getting the drivers loaded for this ‘semi-standard’ interface on the Mac was the most arcane aspect of the configuration. There are tons of tutorials out there on that subject, I might put up a clearer one myself one of these days.

Once I had it running I snagged a copy of lynx for BSD and I was off to the races.

There are numerous ways to get cross communication going between the old Apple ][ and the Mac going but the easiest way I think is using the tried and true unix utility ‘screen’ and good old fashioned ‘getty’.

Basically the steps are:
Fire up a terminal on the Mac and at the prompt run screen with the argument of the device name of the USB to serial adapter.

Once inside screen you invoke ‘getty’ to get your screen session to an interactive login so you can login and run stuff on your Apple ][.

You do that from the Mac terminal session too. First off you probably should size the terminal to 80×23 so you get decent pagination on the Apple. Then inside screen you type ‘ctrl-A’ then shift and ‘:’ to get to screen’s command mode. Then you type ‘exec ::: /usr/libexec/getty std.9600’ and return to initiate a remote login on the apple ][e. If you are having flakey behavior at 9600 baud change the last argument to getty to ‘std.1200’ then switch over to the Apple ][ to login and you are ready to roll.

Now you can run all kinds of unix BSD commands from the Apple ][ and see the output there too! It’s pretty fun to surf the web in text mode on lynx and also to use irc and play text games. I frequently run ‘top’ so I can see what’s happening on while I compute on the Mac from lovely green screen of the Apple ][.

However the very first thing I did was fire up lynx and hit hackaday. How nice that they have a nice retro edition that looks great on this old green screen!

Down the road I’d like to get a proper TCPIP stack running on the Apple ][ or inside a home built card for the Apple and see it run contiki. It seems like someone should have figured out a way to emulate the uthernet card from retroactive using a cheaper arduino and Ethernet or wifi shield solution. I think that might be the next big retro project for me. Cheers until next post.

« Bringing an Apple IIe and Peripherals Back to Life. Part Two. Fun with the Apple II Super Serial Card!.