Bringing an Apple IIe and Peripherals Back to Life. Part One. 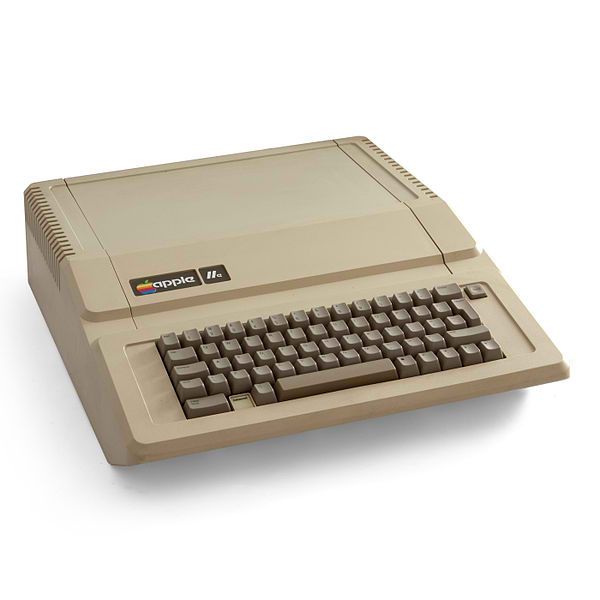 For my birthday this year my awesome wife Ash bought me an 128k Apple IIe, Apple Monochrome Monitor, a Disk II System, a box of 10 5.25″ diskettes, and a parallel printer card. It looked like the set was in pretty nice condition. It had no significant signs of abuse, no missing keys, and the drive that came with it was marked disk 2. That seemed pretty cool since it probably didn’t get as much use as a primary drive. The nice guy at the MIT Flea ( aka MIT HAM Swapfest) who sold it to us was asking $100 and Ash got him to down to $80 USD and an extra box of disks. So it seemed like a bargin to me, seeing as how it even came with the original box. I was pretty psyched to get some 8-bit hardware at home again after getting having so much fun restoring a couple of Classic Macintoshes a few weeks prior. Every single one of these refurbish projects transports me right back to another era in my youth. With the Macs it was the late 80s, early 90s. With this Apple IIe I was setting the wayback machine to the late 70s early 80s.

Well the the machine included no boot disk, no software of any kind actually! That fact was going to serious limit my exploration on this machine. I was stuck just playing with the BASIC interpreter and rocking the video hardware. It was nice that the IIe included an 80 column card and the text looked awesome on the green mono monitor for sure, also poking around the sound registers made some neat beeps. But without long term I/O of any kind it seemed like this would be the extent of my Apple II fun.

It wasn’t until I discovered the amazing program Apple Disk Transfer ProDOS that things got a bit more serious and I could start to experience what this system was all about. What’s great about this program is that it will allow you to bootstrap your Apple IIe without even having to have some kind of a serial interface or working boot disk. It can do its work right over the audio input/output ports of your PC or Mac through standard 1/8″ audio cables to the cassette input and output ports of the Apple IIe.

Fantastic! I was in business. So I configured the Apple IIe and Mac and ran through the bootstrap process. I was all ready to write on one of my 20 year old, but fresh from the box, 5.25″ diskettes. I transferred the ProDOS and ADT Pro Client software through some arcane Apple IIe calls and monitor commands. Everything looked good with the audio transfer, only my disk drive wasn’t appearing in the ADT Pro client’s list of drives! Bummer! So this would be the next hurdle to cross. Figuring out what in the heck was wrong with the disk system.

So I powered it all down and opened the Apple IIe case and looked at what was there. Inside was a 1970’s era Disk II Interface Card and cable. It looks like this: 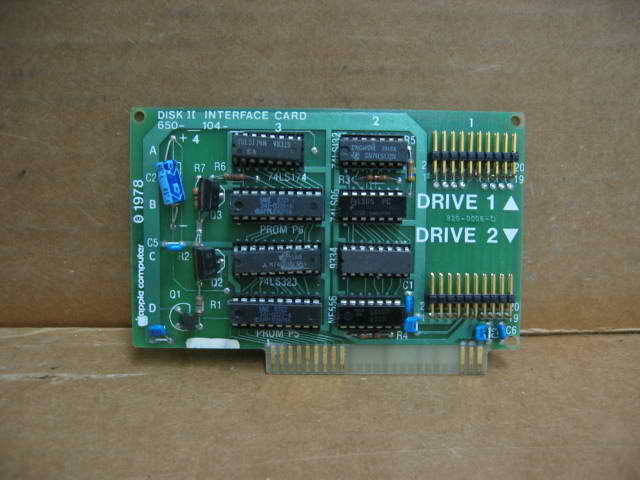 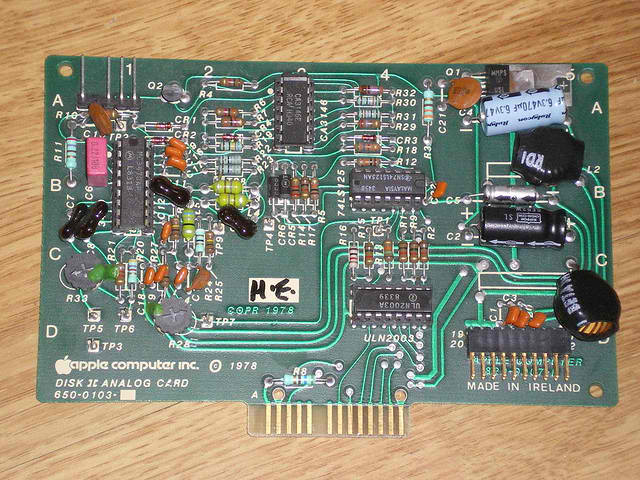 Which brings me to a brief aside. These two components: the interface and analog card are a work of 1970s electronic fine art. The two card drive system was a first for Apple and an absolutely amazing example of the brilliance of Steve Wozniak. Electronics designers always strive for the perfect balance between form and function. This solution is so beautiful in its simplicity and economy of parts in the design. The brilliance of Woz is that he took a complex multi component solution to the problem of reading and writing floppies which previous engineers deployed with an insane amount of expensive parts and boiled it down to less ICs than you can count on two hands. Technically and economically brilliant. Since the Apple II and related peripherals are the longest lived products in Apple’s history I beleive that this design solution for the disk was perhaps the greatest single contribution to the economic viability of Apple Computers. Steve Jobs may have been a smart man but I don’t think he ever made this kind of real economic engineering contribution to Apple.

Anyhow my own beautiful disk solution was somehow broken. The first thing I tried was to pull all of the ICs on both cards and to clean them of black tarnish with Tarn X and Isopropyl alcohol then I carefully reseated them. Still I had no success with seeing the drive in the ADT Pro client. Hrmm. I looked on ebay and found prices for new disks and they were more than the whole kit we got from the MIT Flea. I also couldn’t find the Apple Disk II analog card for less than $40 bucks, still too much for a refurbish. I did however find this little beauty: 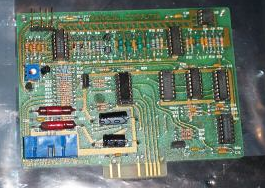 Which from extensive internet research is supposed to be a near criminal copy of the functionality of the Wozniak original, and for $14 dollars was less than the replacement ICs for the original Disk II Analog Card. This seemed to be the lowest common denominator for failure and my next option to try. After a few weeks it arrived from eBay. The first thing I noticed was that the connector was on the opposite side of the card from the original and that it had fewer connection points than the Apple version. Suspicious. That seemed to be a bad omen, but to my surprise after I installed it into the Disk II enclosure, moved around the disk cable to fit the new location, and connected everything back up, it actually worked! The ADT Pro client now was able to see the drive, format a floppy, and transfer the ADT Pro client to disk.

The only odd thing was that the drive light was now always on. Anyone reading this that has thoughts on making it work correctly please feel free to comment. But at least I could INIT and write new disks with ADT Pro which allowed me to boot from the disk. The second diskette I created was a copy of the venerable Copy II Plus. Which has within it a disk speed verification utility. The fact that I could write disks was great but without a ‘calibrated’ drive I would only be able to read and write disks I created myself. I could not give someone a disk that would work nor receive one. So this utility was invaluable. I booted it up and ran the utility and sure enough my drive had a speed of around 210ms which is 5ms too fast for the upper end of ‘calibrated’ and 10ms too fast for being optimally calibrated. I opened up the Disk II and found the speed calibration screw inside and with a jeweler’s screwdriver carefully fiddled and tuned the drive to a perfect 200ms operating speed. Proof that this was necessary was the fact that two disks I wrote previously were no longer readable by the drive after adjustment. However, after a reformat of those disks and a rewrite of the contents everything worked perfectly. I had myself a fully functional Apple IIe and disk system!

With my Mac and ADT Pro I began to create diskette versions of classic Apple II games and programs of the 80s. Ultima, Conan, Archon, and a copy of Modem Manager. The last program and a $10 dollar Super Serial Card clone will be the subject of my next installment of retro computing on the Apple IIe…

« Weird Bug at the Coffee Shop

Bringing an Apple IIe and Peripherals Back to Life. Part Two. Fun with the Apple II Super Serial Card!. »